To learn new things we all need to be open minded to finding out about ‘stuff’ we may have let drift bye without a second glance…. When i first saw this book it was the title that caught my eye, I hummed & arrr’d about buying it (about 3 weeks to be precise!) …. Eventually i invested in a book of calming, thought provoking and enlightening words.

THE INTERNATIONAL BESTSELLER, WITH OVER THREE MILLION COPIES SOLD AROUND THE WORLD 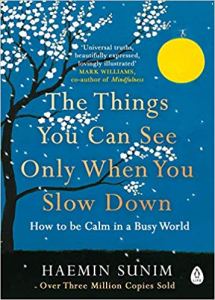 The world moves fast, but that doesn’t mean we have to. In this timely guide to mindfulness, Haemin Sunim, a Buddhist monk born in Korea and educated in the United States, offers advice on everything from handling setbacks to dealing with rest and relationships, in a beautiful book combining his teachings with calming full-colour illustrations. Haemin Sunim’s simple messages – which he first wrote when he responded to requests for advice on social media – speak directly to the anxieties that have become part of modern life and remind us of the strength and joy that come from slowing down.

Hugely popular in Korea, Haemin Sunim is a Zen meditation teacher whose teachings transcend religion, borders and ages. With insight and compassion drawn from a life full of change, the bestselling monk succeeds at encouraging all of us to notice that when you slow down, the world slows down with you.

Purchase – The Things You Can See Only When You Slow Down by Haemin Sunim Here.

If you collect 100 black ants and 100 fire ants and put them in a glass jar, nothing will happen. But if you take the jar, shake it violently and leave it on the table, the ants will start killing themselves. Red believes that black is the enemy, while black believes that red is the enemy, when the real enemy is the person who shook the jar. The same is true in society. Men vs Women Black vs White Faith vs Science Young vs Old Etc ... Before we fight each other, we must ask ourselves: Who shook the jar?
Sometimes your actions are made by how you read what is written 🤔😏🤭
Many people take things too serious, but being lonely is not something to be scoffed at 🙄